Sisters of St. Dominic of Amityville > The History of Rosary Hall

Rosary Hall is as resilient as the Sisters. It has weathered many storms, including fire, hurricanes, and water damage. With an architecture based on the Holy Cross Convent in Regensberg, Germany, the Motherhouse and Novitiate were completed in 1876. In 1920 it grew to include a farm, outbuildings, orchards, a cemetery, and a grotto.

Named a New York State historic landmark, the site was added to the National Register of Historic Places in 2007 which protects and preserves the future of the properties. All renovations accommodating the needs of the retired Sisters, referenced descriptions of the original exterior and interiors. Experts attended every detail with reverence and dedication to the spirit of this great building — not only as a historic site but as the Sisters’ home. 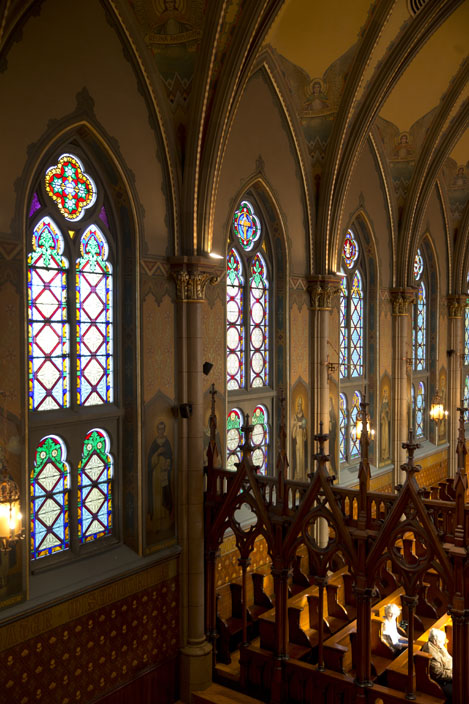 1875: The Amityville presence begins with a donation of 83 acres from Mr. Schlegel and Mother Seraphine’s purchase of the adjacent 19-acre farm “for a big convent.”

1879: Dedication of the Chapel. Expanded facilities include classrooms for neighborhood children and the 120-boy and 60-girl orphans who live on the grounds.

1880s: To accommodate the Sisters’ farm, several out buildings are added, including a carriage barn, chicken house and ice house (sometimes called the potato house.)

1888: Tiny St. Dominic’s Chapel is built in the woods, on the west side of Albany Avenue. It is later moved to its current site, by the Sisters’ cemetery, in 1905.

1913: Fire escapes are added to the Novitiate.

1953: In preparation for the Congregation’s centenary, murals and paintings are cleaned, and the sanctuary is carpeted.

1965: Rosary Hall is renovated, modernized and made fire-resistant.

1970: Fire in the electrical wiring of the bell tower. Chapel is closed until the following Spring.

2016: One hundred and twenty seven retired Sisters live in the Motherhouse in Amityville.